Already there. We choose locations that appear to us to have strong economic development potential in order to provide our customers around the world with ideal conditions for their business. We have created a powerful global network for our customers and established a trust advantage through our market experience. A Messe Düsseldorf office is always open, so that we can offer you optimal support for your trade fair appearance in person. A brief overview of the major locations follows:

Düsseldorf: Your home base in the heart of Europe

Contacts to the major economic regions can be established at Düsseldorf trade fairs. Exhibitors from around the globe make use of these presentation platforms for industry, manufacturing, trade and services to tap into international markets from Düsseldorf. Almost 60 % of the exhibitors and visitors at our capital goods trade fairs in Düsseldorf come from abroad.

Approximately 5,000 foreign companies have offices at our home base; more than 750,000 businesses — among them 21 of Germany's 50 largest companies — are active in North Rhine-Westphalia.

With 11.2 million inhabitants, the Rhine-Ruhr metropolitan area is one of the largest conurbations in Europe. The German Federal Republic is one of the world's leading economic nations. The world champion of exports sold products valued at more than EUR 995 billion to other countries in 2008.

The Moscow metropolis is the most significant economic centre in Russia and simultaneously the most important trade fair venue in the country. Tremendous opportunities wait here for business contacts: Approximately 400,000 companies are based in the catchment area of the most densely populated city in Europe; most foreign companies have their offices here.

Next to the growing consumption among the 142 million inhabitants, the demand for state-of-the-art machinery and equipment is also growing, making up more than 51 % of all imported goods. Messe Düsseldorf has been active in Moscow since 1963 and now has a subsidiary there — naturally focusing on our areas of expertise, for example with INTERPLASTICA und der upakovka in the area of plastics and packaging.

The world's most densely populated market

Shanghai, Hongkong and Beijing are the Messe Düsseldorf's hubs for trade fairs in the Middle Kingdom — a domestic market with roughly 1.3 billion people and an industry that is continuously growing in all fields and has established itself on a high international level. 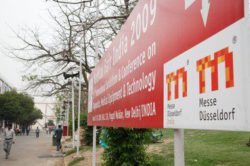 New Delhi and Mumbai — hubs in the world's largest democracy.

In India, Messe Düsseldorf is present at the two most important trade fair locations: New Delhi and Mumbai, and with that at a business location that promises enormous growth potential in many fields. 1.2 billion people live in India, with the middle class and the highly qualified group growing rapidly.

With 362 inhabitants per square kilometre, India is one of the most densely populated countries in the world. The enormous urbanisation carries risks and opportunities. It has, for example, led to the development of a growing medical sector on the subcontinent, accompanied by the Medical Fair India, organized by Messe Düsseldorf INDIA and Messe Düsseldorf. The county's industry is on a modernisation course and is in need of state-of-the-art machinery, equipment and services. This means good opportunities for globally active businesses, also in the short term — for example at PLASTINDIA, indiapack/pacprocess or GLASSPEX INDIA.

Tokyo. With a GDP of US$ 38,500 per capita, Japan is one of the world's leading industrial nations. The country's businesses are among the international frontrunners in the export of goods. In 2008 alone, Japanese products valued at 783 billion US dollars found buyers all over the world.

From its Tokyo location, Messe Düsseldorf Japan supports companies in tapping into new market opportunities and nurturing contacts in Europe and worldwide. With its full-service offerings, the subsidiary ensures the professionally prepared presence of Japanese businesses at our trade fairs in Düsseldorf and worldwide.

Chicago. From its location in Chicago, Messe Düsseldorf North America supports US-American and Canadian businesses that come to our trade fairs in Düsseldorf and around the world as exhibitors or visitors.

Here we create connections to the world's primary export markets; directly to Central and Eastern Europe, in the Asian growth regions and of course to the most international events in our portfolio — the leading trade fairs in Düsseldorf.

From Chicago, we coordinate the presence at our trade fairs in Düsseldorf and worldwide —full-service, of course, as usual.

The steppingstone into the Southeast Asian markets: Singapore.

From here, Messe Düsseldorf coordinates trade fairs in the entire economic region. In the consolidation of the national economic regions to the collective economic zone of the ASEAN countries, aspiring industrial nations such as Indonesia or Vietnam are transforming into exceptionally dynamic markets.

With a total population of roughly 580 million, Southeast Asia also promises a growing demand for consumer goods. Key markets such as Thailand, Malaysia, the Philippines and Singapore continuously recorded an average increase in the gross domestic product of five to six percent over the past several years.

As a trade fair organiser, Messe Düsseldorf Asia utilises the positive changes in this economic landscape for, among others, wire/Tube Southeast ASIA in Bangkok and Plastic & Rubber Vietnam.