Recognition by the Society of Architects and Engineers (AIV) Düsseldorf

Showpiece for the collaboration between architects and structural engineers 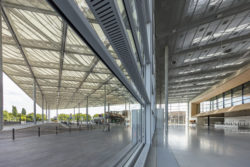 The members of the renowned Düsseldorf Society of Architects and Engineers (AIV) have cast their vote and decided: “Building of the Year 2022” is the Neue Messe Süd – the new south-side entrance developed by slapa oberholz pszczulny | sop architekten for Messe Düsseldorf GmbH and realised in close cooperation with the structural engineers at Schüßler-Plan. The members of this tradition-rich society elected the project from a shortlist of three buildings recently completed in and around the Rhine metropolis: alongside Neue Messe Süd nominations also went to Kö-Bogen II (ingenhoven associates) as well as the extension of the “Forum Wasserturm” in Meerbusch (RKW Architektur +).

Düsseldorf, 20 September 2022. Messe Düsseldorf completed one of the most ambitious construction projects in the company’s history last year: in addition to the new multi-functional Hall 1 with conference rooms a new, all-glass South entrance was built with a translucent, illuminated cantilevered roof and connecting underground parking. As a result, one of the most modern and multi-functional trade fair centres and venues has come into being in the south of the Düsseldorf Exhibition Centre site, that complies with highest standards in both architectural and functional terms. The Düsseldorf Society of Architects and Engineers (AIV) has now declared the set of buildings the “Building of the Year 2022”. In future, a plaque in the foyer at Entrance South will document this award; it will be unveiled on the morning of the first day of glasstec 2022, the world’s leading trade fair for the glass industry (20 – 23 September 2022).

“Messe Düsseldorf’s new southern access is a showcase for the successful cooperation between architects and engineers – and, hence, also an integral part of our Society’s DNA,” says Dieter Schmoll, 1st Chairman of AIV Düsseldorf, justifying the members’ vote. Especially the covered entrance plaza stands out: the 150 m long roof structure tapering towards the Rhine front spans the 7,800 forecourt with filigree lightness and brings together the entire transport infrastructure – from taxi stands, bus stops and E-charging stations to the underground parking access and access routes to the neighbouring green spaces. Supported by few, slender concrete columns the roof is formed by a uniform lozenge structure covered by a translucent glass fibre woven membrane. “This innovative solution was the prerequisite for bringing together indoor rooms and outdoor spaces, transport zones and areas for encounters,” adds Dieter Schmoll.

The new face towards the city: the South Entrance

Bernhard Johannes Stempfle, Managing Director Finance and Infrastructure, delights at the renowned award: “Neue Messe Süd is one of the most modern trade fair centres and venues that lives up to highest technical standards. It is our new “figurehead” and further increases the appeal of Düsseldorf as trade fair location. We are grateful for all the positive feedback we have received for this building. The ‘Building of the Year’ Award presented by the Düsseldorf Society of Architects and Engineers is a special honour for us.”

The construction of ‘Neue Messe Süd’ joins a line of buildings that sop architekten have planned and realised for Messe Düsseldorf since the turn of the millennium. Jurek Slapa, Managing Partner of sop architekten, says thanks on behalf of all involved architects, engineers and expert planners: “Thanks to the successful cooperation of all those involved in the project and the trust placed in us by Messe Düsseldorf, we are all proud to look at the new face of Messe Düsseldorf here, which will hopefully leave a lasting impression on the memory of many Düsseldorf citizens and international trade fair visitors.”

The new Hall 1: high standards and flexible use

The new entrance complex also includes Hall 1, which directly adjoins the entrance foyer across its entire width. 158 metres long and 77 wide, the new hall boasts more than 12,027 square metres, roughly corresponding to Halls 8 a and b. In technical terms the new hall meets the high standards of the entire exhibition centre. It is accessible via 7 gates and suspensions from the hall ceiling are possible as are media supply connections to stands via the hall floor. For pedestrians, the hall is linked to CCD South via a bridge on the 1st floor. In addition to the link to Halls 3 and 4, a main thoroughfare leads from the South Entrance directly to the rest of the exhibition grounds. Messe Düsseldorf is thus considerably increasing the hall’s options for use and at the same time increasing the flexibility of its design.

A total of 6 conference rooms with 200 square metres for 198 people each are available on the 1st floor of the hall. All rooms can be divided in the middle, making them even more flexible. In addition, the hall itself can also be used as a venue outside of trade fair times and can accommodate up to 10,000 people in rows, for example. This flexibility also opens up completely new dimensions in venue marketing for Messe Düsseldorf's subsidiary Düsseldorf Congress.

The result of the “Building of the Year 2022” Competition

Of the more than 290 members of the Düsseldorf Society of Architects and Engineers, 104 people took part in the online vote for the "Building of the Year 2022". Up to five points could be awarded for each of the three nominated projects. This resulted in the following final result:

Photos of the plaque unveiling can be found in the glasstec photo database at https://medianet.messe-duesseldorf.de/newpress/glasstec-online.

Messe Düsseldorf is among the most successful trade fair companies worldwide. It hosts around 40 trade fairs including 20 leading international trade fairs at its 613,000 sqm exhibition centre on the Rhine. In the 18 halls the international market leaders and top decision-makers of various sectors get together every year in order to present and discover innovations, to exchange and to network. The sectors of expertise of Messe Düsseldorf include: “Machinery, Plants and Equipment” (i.a. drupa, K, interpack, glasstec, wire and Tube); “Retail, Trades and Services” (EuroShop, EuroCIS, ProWein); “Health and Medical Technology” (MEDICA, COMPAMED, REHACARE); “Lifestyle and Beauty” (BEAUTY, TOP HAIR) as well as “Leisure” (boot, CARAVAN SALON). Add to this numerous conventions, corporate events, conferences and meetings by its subsidiary Düsseldorf Congress. Abroad, Messe Düsseldorf organises 65 events and participations. The global network of the group of companies encompasses 76 foreign representatives for 139 countries – including 6 international subsidiaries.