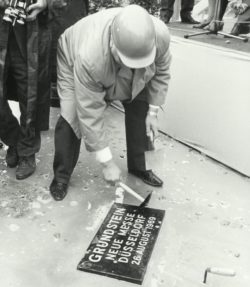 The Düsseldorf Exhibition Centre in the district of Stockum is celebrating its 50th anniversary: on 26 August 1969, the foundation stone was laid for the then largest and most expensive building project in the City of Düsseldorf to date. The city invested DM 395 million in the new exhibition centre in the north of Düsseldorf – one third of its annual budget at the time and three times more than the Rheinkniebrücke bridge.

The good reputation that Düsseldorf had acquired over more than 150 years as a trade fair and exhibition city was at stake: the capacities of the old trade fair grounds on Fischerstrasse in the city centre were exhausted, while trade fairs in other cities continued to grow. The Düsseldorf site was not able to keep up with the demands from the different sectors – especially the leading international trade fairs drupa, K and interpack. Relocating the Düsseldorf Exhibition Centre to maintain its competitiveness was unavoidable.

On 20 September 1968, after careful examination, the city council unanimously decided to relocate the exhibition grounds to Düsseldorf-Stockum. One year later, on 26 August 1969, the foundation stone for the new exhibition centre was laid. Construction took almost two years. The new grounds were fully functional for the first time at K in 1971.

Setting the exhibition centre apart was its planning and design from a single source based on the latest insights in the trade fair business. An essential feature: the clear arrangement of the halls as a concentric array and their ground-level construction. This made it easier to bring exhibits into the halls which were also equipped with heavy-duty floors and a narrow grid of supply ducts to create the best conditions for Düsseldorf’s industrial goods fairs and their heavy machinery. At the same time, the neutral-functional halls were ideally suited to a wide variety of events – Düsseldorf’s leading trade fair portfolio at that time already included such diverse topics as fashion and foundry technology. A special feature of the site back then were also the pedestrian bridges with plexiglass roofs at a height of 5 m, connecting the halls and entrances over a distance of 1,000 metres making them the longest moving pavements in Europe at the time. The idea of service was also taken into consideration from the very beginning. Not only restaurants with a total of 5,000 seats were designed, but also offices for the authorities such as police, customs and fire brigade, as well as service providers such as the post office, forwarding and cleaning companies, pharmacies and banks, and even an indoor swimming pool. Back then the conference centre, CCD.Süd, was set up right next to the main restaurant and adjacent to the banks of the Rhine, so that smaller trade fairs could be held parallel to congress events. The new trade fair concept also included optimum transport links and sufficient parking spaces. The exhibition grounds in Düsseldorf-Stockum thus set new architectural and technical standards.

Consistent customer orientation right from the planning stage also forms the basis of the current construction project for Neue Messe Süd / Hall 1. Today, multifunctional hall areas and high-quality space for conferences and congresses of all sizes are in great demand. Düsseldorf’s new building offers both at the highest level. With the new Messe Süd, Messe Düsseldorf is creating one of the most modern and multifunctional trade fair and event locations in the world, securing its position at the forefront of the changing trade fair market.