Bernhard Johannes Stempfle is the new Honorary Consul of the Principality of Monaco in North Rhine Westphalia.

The head of finance at Messe Düsseldorf is now representing the Principality in North Rhine Westphalia.

The new position illustrates many years of close, friendly ties between Messe Düsseldorf and the Mediterranean Principality. 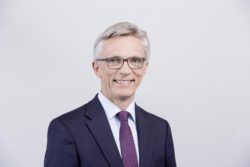 The idea was suggested by Her Excellency, Ms. Isabelle Berro-Amadei, the Ambassador of Monaco to Germany, and so Bernhard Johannes Stempfle (53) was appointed Honorary Consul of Monaco for North Rhine Westphalia on 6 July 2018 upon a princely decree given by His Serene Highness, Prince Albert II of Monaco. The exequatur was issued by the Foreign Office of the Federal Republic of Germany on 7 August.

The member of the Messe Düsseldorf Executive Board has now taken over from Dr. Bernd Kunth, who is passing on this office to him after nearly 40 years. The consular district covers the German federal state of North Rhine Westphalia, and the head office of the honorary consular representation is Messe Düsseldorf GmbH. “I’m very pleased to see this handover,” says the Ambassador, “as I’m confident that Bernhard Stempfle will be successful in this position and thus continue the good friendship between the Principality of Monaco and the state of North Rhine Westphalia, previously established by Dr. Kunth.”

Once again, therefore, the office of an honorary consul will be held by a Managing Director of Messe Düsseldorf. Werner M. Dornscheidt, Chief Executive Officer of Messe Düsseldorf GmbH, has been Honorary Consul of the United Mexican States since 2006. Bernhard Stempfle spent several years living in France, a country with close ties with Monaco, and is therefore familiar with the language and culture of that region. “It is a great honour for me to represent the Principality of Monaco in North Rhine Westphalia, and I’m very much looking forward to successfully continuing the friendly cultural and economic relations between Monaco and the state of North Rhine Westphalia.”

Apart from France, Germany is Monaco’s most important export partner and the second most important import partner after Italy. Although the Principality is among the smallest countries of the world, with a population of only 37,550, it is a robust economic location and a valuable partner to Messe Düsseldorf. The international representation of Messe Düsseldorf in France has been actively targeting Monaco as a market. Over the last 10 years (2008 to 2017), trade fairs in Düsseldorf attracted 1,129 visitors from Monaco. During the same period, 52 exhibitors from the Principality occupied 1,439 sqm of net space. Most exhibitors and visitors attended boot Düsseldorf, the international boat and water sports show.

boot as a platform for the Monaco Ocean Foundation in Düsseldorf

For decades, Messe Düsseldorf has been welcoming Monaco’s heads of state at boot. In 1994 Monaco was the partner country of the 25th boot, which was opened by Prince Rainier III and his son, Crown Prince Albert. In his current function as the reigning Prince, Albert II has visited boot several times recently, promoting the Prince Albert II of Monaco Foundation. He also established the Ocean Tribute Award at boot 2017. This European maritime award was jointly created by the Prince’s foundation, the German Ocean Foundation and boot Düsseldorf. From 2018 it will be awarded annually, in three segments: society, industry and science. “I’m very pleased that my colleague Bernhard Stempfle is now representing the Principality of Monaco as its Honorary Consul,” says Werner M. Dornscheidt. It will create even closer ties between the two partners – Monaco and Messe Düsseldorf – and will have a positive impact on our collaboration with Prince Albert II’s environmental foundation.”

Prince Albert II has close connections to Düsseldorf, the capital of North Rhine Westphalia. As well as coming to boot, he also visited the Grand Départ of the Tour de France in Düsseldorf in 2017. Following his spectacular Antarctic expedition, the climate protection advocate attended the gala establishing the Düsseldorf-based German branch of the Prince Albert II of Monaco Foundation. The chairman of the branch is Dr. Kunth.

The new premises of the Honorary Consulate of the Principality of Monaco in North Rhine Westphalia will be set up in the entrance area of Messe Düsseldorf’s administration building (Opening hours: Monday – Friday, 10:00 – 13:00 hrs).