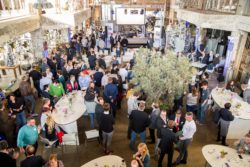 Here start-ups from the region receive a “jump-start”: digihub Düsseldorf/Rheinland provides them with subsidies, office space, consultancy and networking opportunities. Messe Düsseldorf will support the network for promoting start-ups over the coming three years.

Until late 2022 Messe Düsseldorf will sponsor digihub with EUR 20,000 per year. Over this period it will also sit on the advisory board of digihub and will contribute with industry knowledge and networks from its 22 global No. 1 trade fairs. Dr. Christian Plenge, Executive Director Digital Strategies and Communication at Messe Düsseldorf, looks forward to the cooperation: “With our global No. 1 trade fairs we create platforms where start-ups find industry partners and investors. It is part of our DNA to support young companies.”

Apart from Messe Düsseldorf there are further companies, cities and municipalities, CICs, financial institutions and investors backing up the hub. As part of digihub’s start-up promotion scheme five start-ups are sponsored for five months each three times a year. From all three start-up “classes” one winner is selected to receive repeat funding. To qualify the start-ups have to convince a jury composed of company representatives and other digihub partners at the so-called “Ignition Demo Nights”.

In the funding period the start-ups receive funds, office space, consulting as well as opportunities to take part in events to get to know corporate representatives, venture capital providers and the like. These events also include so-called “Tech Innovation Nights”, i.e. themed evenings for specific industries where Messe Düsseldorf will kick in with its expertise in holding global No. 1 trade fairs in various industries. For April, for example, a “MedTech Innovation Night” is scheduled in cooperation with the world’s biggest medical technology trade fair MEDICA. On top of this, digihub organises so-called “Reverse Pitches” where enterprises present issues or challenges for which start-ups can submit their solutions. Digihub aims to introduce start-ups to renowned companies and to establish them on the market.

Dr. Klemens Gaida, General Manager of digihub, rejoices at the support of Messe Düsseldorf: “It never ceases to impress me when such experienced companies as Messe Düsseldorf share and transfer their knowledge and opportunities to start-ups. I look forward to an exciting cooperation.”

By supporting the digihub Messe Düsseldorf follows on from its own offer for start-ups: it offers special exhibition areas for start-ups at all major Düsseldorf fairs – such as the Start-up Hub at EuroCIS 2019 and EuroShop 2020, the Start-up Zone at A+A 2019 and at glasstec 2020 as well as the annual MEDICA START-UP PARK, to name but a few. “Our exhibition offering is received very well by the start-up community,” delights Werner M. Dornscheidt, President & CEO at Messe Düsseldorf who goes on to say: “We will establish a new and inspiring hall concept for drupa in 2020. The new Forum drupa next age pitches itself as a centre for disruptive developments and aims to create a scope for networking where global players, start-ups and key players in the industry enter into a productive exchange on new product ideas, technologies and business models.”

With a revenue of around EUR 369 million in 2019, the Messe Düsseldorf Group has maintained its position as one of Germany's most successful trade fair companies. 29,195 exhibitors presented their products to 1.4 million trade visitors at events in Düsseldorf in 2019. Compared with previous events, this was an increase in the numbers of both exhibitors and visitors. The Düsseldorf Exhibition Centre hosts around 50 trade fairs in five sectors of expertise: machinery, plants and equipment; the retail trade, trades and services; medicine and healthcare; lifestyle and beauty, and leisure. The trade fairs include 22 proprietary number-one events as well as, currently, 15 robust partner and guest events. Also, its subsidiary Düsseldorf Congress held over 1,000 conventions, corporate events, conferences and meetings in 2019, attracting around 365,000 delegates in all. In addition, the Messe Düsseldorf Group organises 75 proprietary events, joint events and contracted events in other countries and is one of the leading export platforms in the world. Proprietary events in Düsseldorf attracted around 73% international exhibitors and 37% international visitors in 2019. The group runs a global network of 77 international offices, including 7 international subsidiaries.

* All figures are subject to final accounts.