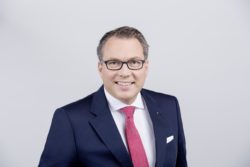 Hans Werner Reinhard, Operating Managing Director at Messe Düsseldorf, informed the Supervisory Board of Messe Düsseldorf today, Friday, 28 June 2019, that he will be resigning from all his functions as of 31 December 2019. The background to this personal decision is that Hans Werner Reinhard and his family will be moving to Southern Germany. His wife will assume responsibility for her father's company, which was founded in 1776 and is now in its seventh generation. Hans Werner Reinhard will follow his wife to Southern Germany, support her in her new job and reorient his career.

Werner M. Dornscheidt, CEO of Messe Düsseldorf: "Hans Werner Reinhard has been by my side jointly shaping this company for 16 years now. Together, we have further developed our leading international trade fairs and made them what they are today. In addition, we have successfully placed new trade fairs on the market. Hans Werner Reinhard's initiatives, his entrepreneurial spirit and his perseverance have made a decisive contribution to Messe Düsseldorf's success today. I personally also regret his departure – after all, we have been working together since 1999 and were also together at Leipziger Messe. I wish him all the best for the future".

Hans Werner Reinhard makes it clear that this step was not an easy one for him to take: “I am giving up a position that is a dream job for many and also for me. Serving one of the world's top ten trade fair companies as a Managing Director is hard to beat. This decision was not an easy one because Messe Düsseldorf played a major role in my professional development," says Reinhard, and goes on to say: "The DNA of Messe Düsseldorf has always given me moments of happiness that made it easy to be part of a big family. Anyone who knows me knows that this family idea is one I hold dear and also cultivate in my private life. My wife has followed me on my professional path for the past 20 years, now I plan to follow her."

During his studies of International Business Administration at the European Business School in Oestrich-Winkel, the University of California in Berkeley, USA and the Universidad Argentina de la Empresa in Buenos Aires, Argentina, Hans Werner Reinhard’s major interest was international trade fair management in theory and practice. Trade fairs was the subject of his two dissertations for the degrees of Dipl.-Betriebswirt in 1996 and Diplom-Kaufmann in 1997. Already as a student he worked for the former NOWEA (Nordwestdeutsche Ausstellungsgesellschaft) in Düsseldorf and its subsidiary Dusseldorf Trade Shows in Chicago.

He began his professional career at the former Messe Düsseldorf International GmbH as part of the contract project for the operation of the German Pavilion at EXPO 2000 in Hanover. In 1999 Reinhard moved to Leipziger Messe GmbH, where he soon became Head of the Management Affairs Department, and from 2000 was also Head of the Protocol Department and from 2001 Project Manager for two trade fair events. On 1 January 2004, Reinhard was appointed to the management of Messe Düsseldorf GmbH as Head of Communications and Authorised Signatory. On 1 January 2007 Reinhard took over as Division Director of  Domestic Trade Fairs II, with a major focus on capital goods trade fairs.

Reinhard is married with three daughters.