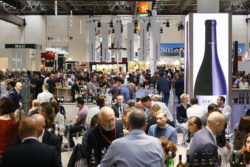 Messe Düsseldorf is expanding to Japan with its “Wine & Spirits” portfolio related to the world’s leading trade fair ProWein. It is acquiring the “Wine” segment from the existing Wine & Gourmet and will organise this as ProWine Tokyo from 2024. Koelnmesse is organising an event focusing on gourmet food and ISM Japan, which covers the supplementary product ranges of sweets and snacks. ISM Japan will already kick off in 2023 for the first time. The co-located events create synergies and benefit from the appeal of the Japanese food fair FABEX.

Tokyo, 14 September 2022. Messe Düsseldorf is taking over the “Wine” segment of the Wine & Gourmet Japan event from Koelnmesse, which will in future focus on the gourmet-food segment, as well as - with ISM Japan - on its core competencies in the food sector in a complementary way. The theme of wines and spirits will form part of the new ProWine Tokyo from 2024; already from 2023 the title will be Wine & Gourmet – powered by ProWein. Messe Düsseldorf contributes its expertise and global wine sector network to boost the internationality of the exhibiting companies. With ISM Japan Koelnmesse is consistently expanding its competencies in the sweets & snacks segment. In the style of the world’s leading trade fair for the industry, ISM in Cologne, ISM Japan will kick off for the first time in 2023. This is an important move for international portfolio development and completes the portfolio available worldwide in terms of diversity and depth of ranges. The befitting setting for the two trade fairs is provided by FABEX, which is organised by special-interest publisher Japan Food Journal. It is held on an annual basis concurrently with a series of other trade fairs for gourmet food and beverages at the Big Sight exhibition centre in Tokyo, providing a comprehensive overview of the sector.

Synergies with growth potential
By combining FABEX, ProWine Tokyo and ISM Japan visitors will enjoy a larger and more specialised range. The growth potential is enormous, especially owing to the Free Trade Agreement with the European Union that entered into force in February 2021. Wine & Gourmet – powered by ProWein will be held from 12 to 14 April 2023 in parallel with ISM Japan. The following year the Wine segment will then officially be launched as ProWine Tokyo – always concurrently with the big FABEX and its other four food trade fairs: Dessert Sweets & Bakery Festival, Food & Drink OEM Matching Expo, Japan Noodles Industry Fair, and Premium Food Show. The latest edition of this important industry meeting in 2019 was attended by 917 exhibitors from 19 countries as well as 78,024 trade visitors.

“With ProWine Tokyo we help our customers to become successfully established on this very dynamic market in Japan. On account of the partnership with FABEX we are operating in a very appealing setting. Koelnmesse has laid the foundation for successful business in Japan, which we leverage to generate growth. All in all, we are very confident that we can create added value for the sector with ProWine Tokyo,” says Michael Degen, Executive Director Messe Düsseldorf und Chairman of the Board Messe Düsseldorf Japan.

“By extending the event to include ISM Japan and combining ProWine Tokyo with our gourmet focus – all of this embedded in the FABEX, which enjoys high attendance and high reach - we are creating an optimal offering for our customers from the respective sectors and a unique platform for Japanese retailers at the same time. It is a win-win situation,” explains Denis Steker, Senior Vice President International of Koelnmesse GmbH.

The organiser of FABEX, the Japan Food Journal, also welcomes the current development at the trade fair location Tokyo. “The Japanese food & beverage market has an above-average demand for quality. We are therefore very pleased that our customers will in future be able to benefit from the pooled competence of ProWine Tokyo and ISM Japan”, says Katsuki Hirayama, Vice President of Japan Food Journal.

After the USA and China, Japan is the world’s third-biggest economic market with a unique, very demanding food and drink culture. For 2022 the per-capita turnover for wine is forecast at around Euro 66, which is clearly above the global per-capita turnover of Euro 37 (Source: Statista). This makes Japan the ideal location for ProWine Tokyo as a satellite event of ProWein – International Trade Fair for Wines and Spirits.

In addition, Japan is the sixth-biggest confectionery market in the world and considered a high-growth trendsetter. Due to its high safety and hygiene standards Japan often serves as the first access to the Asian market. The Asia-Pacific region promises strong growth with an average compound annual growth rate (CAGR) of 6.2% for the forecast period 2020 to 2025. 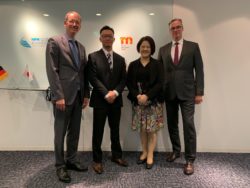 Messe Düsseldorf is among the most successful trade fair companies worldwide. It hosts around 40 trade fairs including 20 leading international trade fairs at its 613,000 sqm exhibition centre on the Rhine. In the 18 halls the international market leaders and top decision-makers of various sectors get together every year in order to present and discover innovations, to exchange and to network. The sectors of expertise of Messe Düsseldorf include: “Machinery, Plants and Equipment” (i.a. drupa, K, interpack, glasstec, wire and Tube); “Retail, Trades and Services” (EuroShop, EuroCIS, ProWein); “Health and Medical Technology” (MEDICA, COMPAMED, REHACARE); “Lifestyle and Beauty” (BEAUTY, TOP HAIR) as well as “Leisure” (boot, CARAVAN SALON). Add to this numerous conventions, corporate events, conferences and meetings by its subsidiary Düsseldorf Congress. Abroad, Messe Düsseldorf organises 65 events and participations. The global network of the group of companies encompasses 76 foreign representatives for 139 countries – including 6 international subsidiaries.