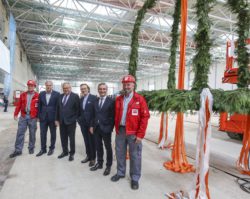 Messe Düsseldorf has reached the halfway point in one of the most ambitious construction projects in its history. Today is the day when the large construction site on the River Rhine witnessed the topping-out ceremony for the new Hall 1. Comprising the new Hall 1 and the state-of-the-art South Entrance, this stunning complex will strengthen Messe Düsseldorf as an international meeting point for industry and also as an economic factor for Düsseldorf as the capital of North Rhine Westphalia.

The traditional topping-out speech was given by the construction managers, Thomas Schulte and Holger Meyer from Osnabrücker Köster GmbH, from the building site of the New Southern Section today, Friday, 14 September 2018. The audience included the Management of Messe Düsseldorf, the tradesmen, construction workers and exhibition centre staff involved in the construction project, as well as representatives of government and administration, the supervisory councils of Messe Düsseldorf and Düsseldorf Congress and the architects of the Düsseldorf architects slapa oberholz pszczulny | sop.

The project, which will be completed at the end of 2019, includes the new multifunctional Hall 1 with meeting rooms, the glass-enclosed new South Entrance with a translucent illuminated canopy and an adjacent underground car park.  Hall 1 will be 12,027 sqm in size, offering space for up to 10,000 people. In addition, the first floor will have six glass-enclosed meeting rooms, each with 200 sqm and space for 198 people. One of these rooms will protrude into the foyer of the new South Entrance, which will provide 2,112 sqm of event space. In front of it, 20 metres high and covering 7,800 sqm, there will be a canopy over a plaza with taxi ranks, public transport connections and an entrance to the new underground car park. This forecourt will also be suitable for events. “The building complex will increase the international attractiveness of Messe Düsseldorf even further and will strengthen its function as a meeting point for a wide range of industries,” says Werner M. Dornscheidt, President and CEO of Messe Düsseldorf. “This will put us in the best possible position.”

The building project also includes a major facelift for the Congress Center Düsseldorf (CCD), which is directly connected with Hall 1, and its audience capacity will be boosted to 16,000 persons. Hilmar Guckert, CEO of Düsseldorf Congress, is pleased about this development: “The new building, its increased capacity and its improved ambience will make the Congress Center Düsseldorf (CCD) even more suitable for the requirements of major conventions, conferences and corporate events. It’s an important step into the future of the international convention business for Düsseldorf.” The Lord Mayor of Düsseldorf and Supervisory Board Chairman of Messe Düsseldorf GmbH, Thomas Geisel, also emphasises the benefits for Düsseldorf: “This is not only a step forward for Messe Düsseldorf and the Congress Center, but also for the City of Düsseldorf. After all, international customers of trade fairs and conventions spend more than one billion euros a year in the city, provide security for over 16,600 jobs and book nearly one third of all overnight stays there. All this provides annual tax revenue of more than 36 million euros. The New Southern Section will help to secure and increase this success.”

The new building will also give the City of Düsseldorf an additional architectural highlight. It will be the new face of the exhibition centre towards the city and also the northern endpoint of the city’s silhouette from the river Rhine. Jurek M. Slapa, the founder and managing partner of the architectural firm slapa oberholz pszczulny | sop, who designed it, is thrilled about the progress of the construction work: “Our ideas started off on paper, and it’s great to see them being turned into reality. We are very pleased that this project between the Rhine and the Nordpark is adding a new architectural touch to the exhibition centre and the City of Düsseldorf.”The general contractor implementing the project is Köster GmbH, and to quote Thomas Kleine-Kalmer, holder of commercial power of representation and head of the Major Projects Division: The roof and shell of the new Hall 1 and the conference wing are now in place. What comes now is the interior work, the underground car park and the canopy. It’s great to see that the progress of the construction work has caused so much amazement and so many happy smiles. It encourages us all the more in our efforts to build the future flagship of Messe Düsseldorf.”

The New Southern Section forms part of the Messe Düsseldorf Masterplan 2030 with its many construction and redevelopment plans to ensure that the exhibition centre remains attractive and competitive. These include a number of completed projects, such as the new Halls 6, 7 and 8, the new North Entrance and the complete overhaul of seven halls. Werner M. Dornscheidt sees this as a crucial investment into the future: “In this way,” he says, “our premises will be further adjusted to suit demand and the needs of our customers, while also increasing the service factor.” In all, Messe Düsseldorf is investing 650 million euros in the implementation of its masterplan. The New Southern Section alone is costing 140 million euros. Moreover, Dornscheidt emphasises that they are “doing all this without subsidies”. It means that Messe Düsseldorf will be ideally prepared for the future.

You will find continually updated information about the construction project of the New Southern Section https://www.messe-duesseldorf.com/construction_timeline

A large selection of construction site photos in a printable resolution can be downloaded from http://medianet.messe-duesseldorf.de/press/bau

Köster GmbH is a leading structural and civil engineering company in the German construction industry. Its services range from individual plans to the turnkey completion of entire projects. Working closely with customers, Köster executes comprehensive, innovative construction solutions and has a network of 16 offices and 15 competence centres. Founded in 1938, Köster GmbH has its head office in Osnabrück and forms part of the Köster Group, which operates throughout Germany.

The architects J.M. Slapa, H. Oberholz and Z. Pszczulny have worked together on the development and realisation of building projects for over 30 years. Their areas of expertise cover offices, commercial and industrial construction, hotels, residential buildings, airports, sports venues and teaching and research facilities. sop architeken are an architectural firm that operates internationally, has a workforce of around 90 and is based in Dusseldorf. Its hallmarks are a clear and timeless architectural language and a holistic approach to each building, down to the last detail. The architects have had a major impact on the face of Düsseldorf, with buildings such as Gap 15, the Hyatt Hotel at Düsseldorf’s Medienhafen (Media Port) and the new Düsseldorf Airport. The firm’s international reference projects include the Orjin Maslak in Istanbul and the EM Stadium in Wrocław.