Düsseldorf trade fair organisers continue to focus on growth in the future: Shanghai remains at the centre of activities

CEO Dornscheidt: “We want to further expand new business, invest in our global portfolio and attract more visitors to Düsseldorf.” 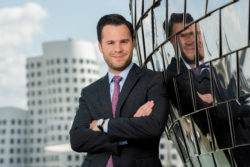 Axel Bartkus, Managing Director at Messe Düsseldorf China Ltd., will continue to coordinate representation of the worldwide events of Messe Düsseldorf Group from China. Bartkus will also be responsible for monitoring and implementating suitable acquisitions and participations in new trade fairs. Assuming Berlemann’s previous role as Global Head of Wine & Spirits (including ProWein trade fair) on 1 April 2019 will be Bastian Mingers, who already served as Senior Project Manager in the ProWein team from 2011 to 2015 and who is currently responsible for New Business Development at ENERGY STORAGE EUROPE, the leading international trade fair for energy storage. 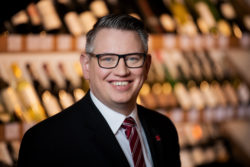 With a 26.1% share in foreign turnover, China ranks second among the most important foreign markets of the Messe Düsseldorf Group after Russia (44.8%) – and it is becoming increasingly important. “We also want to reflect this development in personnel terms,” explains Hans Werner Reinhard, Chairman of the Board of Directors at Messe Düsseldorf China Ltd. Furthermore, Messe Düsseldorf will use this strengthening of its team to break new ground and develop selected topics in line with the needs of its customers. After all, companies are increasingly active in China. According to the World Trade Organisation (WTO), the People's Republic is the world's largest exporting nation with a volume of USD 2,263 b and the second-largest importing nation after the USA with a volume of USD 1,842 b. According to the International Monetary Fund (IMF), China's gross domestic product will amount to USD 14,092 b in 2018 – corresponding to 18.7% of global GDP. The People's Republic is continuously increasing this figure – in 2008 the share was only 12.05%. The contribution of established industrial nations to the global economy is falling, Reinhard explains. Even today, the G7 countries are no longer the seven largest economies in the world: “For trade fair organisers this also means that the emerging markets and China are becoming increasingly important as innovation locations in global competition.”

Shanghai remains the Hub of Activities

In 2018 Messe Düsseldorf Shanghai organised nine trade fairs featuring 8,000 exhibitors presenting their products and services to 420,000 visitors on space totalling 326,000 m2. In addition, Messe Düsseldorf China supported 28 events of the Messe Düsseldorf Group worldwide and ensured that 3,057 Chinese exhibitors were able to present themselves at foreign trade fairs. Forthcoming trade fair highlights include ProWine Asia in May 2019 and swop – Shanghai World of Packaging in November 2019. Messe Düsseldorf plans to expand its range of events and, above all, its global portfolios in China over the next few years.

By enlisting Marius Berlemann Messe Düsseldorf is strengthening its team with a proven expert in the development of focal themes. Berlemann was previously responsible for the Wine & Spirits portfolio at Messe Düsseldorf. Next March, ProWein will welcome the international wine and spirits sector to Düsseldorf with around 7,000 exhibitors from 64 countries. Over 60,000 trade visitors from 133 countries are expected at the forthcoming event that celebrates its 25th anniversary this year. With the first ProWine China in Shanghai in 2013, ProWein laid the foundation for its international satellite network. Around 4,000 exhibitors from 40 countries have presented themselves since then; ProWine China counted around 70,000 trade visitors during this period. Berlemann already spent a year in China for Messe Düsseldorf for the launch of this event.

ProWine Asia made its debut in Singapore in 2016 and was so successful with over 7,300 visitors and around 260 exhibitors that ProWine Asia in Hong Kong followed a year later, kicking off with 310 exhibitors and over 12,000 wine professionals. Since then, ProWine Asia has alternated between Singapore and Hong Kong every spring. The two fairs complement each other perfectly: while ProWine Asia opens up the South East Asian wine market from Singapore (40% of visitors to the last ProWine Asia in 2018 came from outside Singapore) and from Hong Kong it taps into the surrounding markets, ProWine China focuses on mainland China.

In addition, the group’s business activities in the People's Republic of China have a significant knock-on effect on Düsseldorf as a trade fair venue. In 2018, China ranked third behind Italy and France – boasting 1,960 exhibitors and 32,641 m2 of net exhibition space. China was ranked 9th in terms of visitors (9,052). Over the past ten years, the number of exhibitors has risen by 70%, net space has grown by 26% and the number of visitors by 357%. For the next few years, a continuous increase in the number of Chinese exhibitors and visitors is anticipated at the Düsseldorf trade fair venue.

SNIEC continues on Expansion Course: Most Successful Exhibition Centre in the World

Messe Düsseldorf Shanghai is located in the Shanghai-Pudong Special Economic Zone in the immediate vicinity of the Shanghai New International Expo Centre (SNIEC). Düsseldorf's activities on the Chinese market focus on the exhibition centre with its 17 halls, total space measuring 200,000 m2 and outdoor space totalling 100,000 m2. The SNIEC has been seen continuous growth since its inception in 1999 and has developed into the most state-of-the-art exhibition centre with the highest occupancy rates in the People's Republic of China. The rate in 2017 was 65%. A total of 134 events took place at the SNIEC last year (previous year: 114). The owners on the German side are a joint venture of the Düsseldorf, Hanover and Munich trade fair companies and on the Chinese side a company of the City of Shanghai. 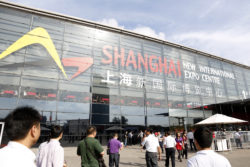